Wyoming is a state in the mountain region of the western United States. The state is the 10th largest by area, the least populous and the second least densely populated state in the country. Wyoming is bordered on the north by Montana, on the east by South Dakota and Nebraska, on the south by Colorado, on the southwest by Utah, and on the west by Idaho. The state population was estimated at 586,107 in 2015, which is less than 31 of the most populous U.S. cities including neighboring Denver. Cheyenne is the state capital and the most populous city, with population estimated at 63,335 in 2015.

The western two-thirds of the state is covered mostly by the mountain ranges and rangelands of the Rocky Mountains, while the eastern third of the state is high elevation prairie called the High Plains. Almost half of the land in Wyoming is owned by the U.S. government, leading Wyoming to rank sixth by area and fifth by proportion of a state's land owned by the federal government. Federal lands include two national parks—Grand Teton and Yellowstone—two national recreation areas, two national monuments, several national forests, historic sites, fish hatcheries, and wildlife refuges.

Original inhabitants of the region include the Crow, Arapaho, Lakota, and Shoshone. Southwestern Wyoming was in the Spanish Empire and then Mexican territory until it was ceded to the United States in 1848 at the end of the Mexican–American War. The region acquired the name Wyoming when a bill was introduced to the U.S. Congress in 1865 to provide a "temporary government for the territory of Wyoming". The name was used earlier for the Wyoming Valley in Pennsylvania, and is derived from the Munsee word xwé:wamənk, meaning "at the big river flat".

The main drivers of Wyoming's economy are mineral extraction—mostly coal, oil, natural gas, and trona—and tourism. Agricultural commodities include livestock (beef), hay, sugar beets, grain (wheat and barley), and wool. The climate is semi-arid and continental, drier and windier than the rest of the U.S., with greater temperature extremes.

Wyoming has been a politically conservative state since the 1950s with the Republican Party candidate winning every presidential election except 1964.

A total commission of 6.0% is typically asked for by “full service” Agents working for the big national real estate firms in Wyoming. 70% of Sellers list with the first Agent they speak to, and we find that most Sellers who agree to pay a full 6.0% commission do not realize that real estate commissions are NEGOTIABLE!

In Wyoming, you will find the following real estate commissions charged*:

In the State of Wyoming, median home prices are as follows*:

At ListingBidder.com, we first negotiate on your behalf a competitive real estate commission structure with HIGHLY EXPERIENCED, HIGHLY RECOMMENDED Agents who know your LOCAL market (even YOUR NEIGHBORHOOD); each ready to bid for your business.  These Agents are not just ordinary Agents as many of them are broker/owners and they have the best ability to negotiate their commissions and be competitive, in part because they do not have to share their listing commission with the brokerage firm.  This is a direct benefit to you and will save you thousands of dollars in real estate commission fees over the typical fees in Wyoming.

In 2014, the United States Census Bureau estimated that the racial composition of the population was 92.7% white (82.9 non-Hispanic white), 2.7% American Indian and Alaska Native, 1.6% Black or African American, 1.0% Asian American, and 0.1% Native Hawaiian or Pacific Islander.

According to the 2010 census, the racial composition of the population was 90.7% white, 0.8% black or African American, 2.4% American Indian and Alaska Native, 0.8% Asian American, 0.1% Native Hawaiian and other Pacific Islander, 2.2% from two or more races, and 3.0% from some other race. Ethnically, 8.9% of the total population was of Hispanic or Latino origin (they may be of any race) and 91.1% Non-Hispanic, with non-Hispanic whites constituting the largest non-Hispanic group at 85.9%.

According to the 2012 United States Bureau of Economic Analysis report, Wyoming's gross state product was $38.4 billion. As of 2014 the population was growing slightly with the most growth in tourist-oriented areas such as Teton County. Boom conditions in neighboring states such as North Dakota were drawing energy workers away. About half of Wyoming's counties showed population losses. The state makes active efforts through Wyoming Grown, an internet-based recruitment program, to find jobs for young people educated in Wyoming who have emigrated but may wish to return.

As of November 2015, the state's unemployment rate was 4.0%. The composition of Wyoming's economy differs significantly from that of other states with most activity in tourism, agriculture, and energy extraction; and little in anything else.

The mineral extraction industry and travel and tourism sector are the main drivers behind Wyoming's economy. The federal government owns about 50% of its landmass, while 6% is controlled by the state. Total taxable values of mining production in Wyoming for 2001 was over $6.7 billion. The tourism industry accounts for over $2 billion in revenue for the state.

A Wyoming coal mine 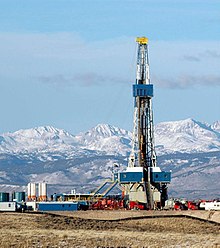 A drilling rig drills for natural gas just west of the Wind River Range in the Wyoming Rockies.

Unlike most other states, Wyoming does not levy an individual or corporate income tax. In addition, Wyoming does not assess any tax on retirement income earned and received from another state. Wyoming has a state sales tax of 4%. Counties have the option of collecting an additional 1% tax for general revenue and a 1% tax for specific purposes, if approved by voters. Food for human consumption is not subject to sales tax. There also is a county lodging tax that varies from 2% to 5%. The state collects a use tax of 5% on items purchased elsewhere and brought into Wyoming. All property tax is based on the assessed value of the property and Wyoming's Department of Revenue's Ad Valorem Tax Division supports, trains, and guides local government agencies in the uniform assessment, valuation and taxation of locally assessed property. "Assessed value" means taxable value; "taxable value" means a percent of the fair market value of property in a particular class. Statutes limit property tax increases. For county revenue, the property tax rate cannot exceed 12 mills (or 1.2%) of assessed value. For cities and towns, the rate is limited to 8 mills (0.8%). With very few exceptions, state law limits the property tax rate for all governmental purposes.

Personal property held for personal use is tax-exempt. Inventory if held for resale, pollution control equipment, cash, accounts receivable, stocks and bonds are also exempt. Other exemptions include property used for religious, educational, charitable, fraternal, benevolent and government purposes and improvements for handicapped access. Mine lands, underground mining equipment, and oil and gas extraction equipment are exempt from property tax but companies must pay a gross products tax on minerals and a severance tax on mineral production.

In 2008, the Tax Foundation ranked Wyoming as having the single most "business friendly" tax climate of all 50 states. Wyoming state and local governments in fiscal year 2007 collected $2.242 billion in taxes, levies, and royalties from the oil and gas industry. The state's mineral industry, including oil, gas, trona, and coal provided $1.3 billion in property taxes from 2006 mineral production.Wyoming receives more federal tax dollars per capita in aid than any other state except Alaska. The federal aid per capita in Wyoming is more than double the United States average.

As of 2016, Wyoming does not require the beneficial owners of LLCs to be disclosed in the filing, which creates an opportunity for a tax haven, according to Clark Stith of Clark Stith & Associates in Rock Springs, Wyoming, a former Republican candidate for Wyoming secretary of state.