The Seattle metropolitan area is located in the U.S. state of Washington and includes the three most populous counties—King, Snohomish, and Pierce—within the greater Puget Sound region. The United States Census Bureau officially defines the metropolitan area as the Seattle–Tacoma–Bellevue, WA Metropolitan Statistical Area. With an estimated population of 3,867,046 as of 2017, it is the 14th largest Metropolitan Statistical Area in the United States, with slightly more than half of Washington's population.

As defined by the United States Census Bureau, the Seattle metropolitan area is made up of the following:

Based on commuting patterns, the adjacent metropolitan areas of Olympia, Bremerton, and Mount Vernon, along with a few smaller satellite urban areas, are grouped together in a wider labor market region known as the Seattle–Tacoma–Olympia Combined Statistical Area (CSA) (See Figure STO), commonly known as the Puget Sound region. The population of this wider region is 4,686,536—roughly two-thirds of Washington's population—as of 2017. The Seattle CSA is the 12th largest CSA, and the 13th largest primary census statistical area in the country. The additional metropolitan and micropolitan areas included are:

A total commission of 6.0% is typically asked for by “full service” Agents working for the big national real estate firms in Seattle-Tacoma-Bellevue, Washington. 70% of Sellers list with the first Agent they speak to, and we find that most Sellers who agree to pay a full 6.0% commission do not realize that real estate commissions are NEGOTIABLE!

In Seattle-Tacoma-Bellevue, Washington, you will find the following real estate commissions charged*:

Seattle's economy is driven by a mix of older industrial companies, and "new economy" Internet and technology companies, service, design and clean technology companies. The city's gross metropolitan product was $231 billion in 2010, making it the 11th largest metropolitan economy in the United States. The Port of Seattle, which also operates Seattle–Tacoma International Airport, is a major gateway for trade with Asia and cruises to Alaska, and is the 8th largest port in the United States in terms of container capacity; its maritime cargo operations merged with the Port of Tacoma in 2015 to form the Northwest Seaport Alliance. Though it was affected by the Great Recession, Seattle has retained a comparatively strong economy, and remains a hotbed for start-up businesses, especially in green building and clean technologies: it was ranked as America's No. 1 "smarter city" based on its government policies and green economy. In February 2010, the city government committed Seattle to becoming North America's first "climate neutral" city, with a goal of reaching zero net per capita greenhouse gas emissions by 2030. 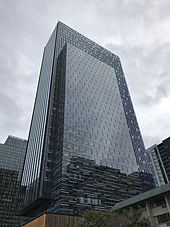 Amazon.comheadquarters building in the Denny Triangle

Still, very large companies dominate the business landscape. Five companies on the 2017 Fortune 500 list of the United States' largest companies, based on total revenue, are headquartered in Seattle: Internet retailer Amazon.com (#12), coffee chain Starbucks (#131), department store Nordstrom (#188), freight forwarder Expeditors International of Washington (#429) and Weyerhaeuser, the forest products company (#341). Other Fortune 500 companies popularly associated with Seattle are based in nearby Puget Sound cities. Warehouse club chain Costco (#16), the largest retail company in Washington, is based in Issaquah. Microsoft (#28) is located in Redmond. Finally, Bellevue is home to truck manufacturer Paccar (#164). Other major companies in the area include Nintendo of America in Redmond, T-Mobile US in Bellevue, Expedia Inc. in Bellevue and Providence Health & Services— the state's largest health care system and fifth largest employer — in Renton. The city has a reputation for heavy coffee consumption; coffee companies founded or based in Seattle include Starbucks, Seattle's Best Coffee, and Tully's. There are also many successful independent artisanal espresso roasters and cafés.

Prior to moving its headquarters to Chicago, aerospace manufacturer Boeing (#24) was the largest company based in Seattle. Its largest division, Boeing Commercial Airplanes, is still headquartered in nearby Renton, and the company has large aircraft manufacturing plants in Everett and Renton, so it remains the largest private employer in the Seattle metropolitan area. Former Seattle Mayor Greg Nickels announced a desire to spark a new economic boom driven by the biotechnology industry in 2006. Major redevelopment of the South Lake Union neighborhood is underway, in an effort to attract new and established biotech companies to the city, joining biotech companies Corixa (acquired by GlaxoSmithKline), Immunex (now part of Amgen), Trubion, and ZymoGenetics. Vulcan Inc., the holding company of billionaire Paul Allen, is behind most of the development projects in the region. While some see the new development as an economic boon, others have criticized Nickels and the Seattle City Council for pandering to Allen's interests at taxpayers' expense. Also in 2006, Expansion Magazine ranked Seattle among the top 10 metropolitan areas in the nation for climates favorable to business expansion. In 2005, Forbes ranked Seattle as the most expensive American city for buying a house based on the local income levels. In 2013, however, the magazine ranked Seattle No. 9 on its list of the Best Places for Business and Careers.

Alaska Airlines, operating a hub at Seattle–Tacoma International Airport, maintains its headquarters in the city of SeaTac, next to the airport.

Seattle is a hub for global health with the headquarters of the Bill & Melinda Gates Foundation, PATH, Infectious Disease Research Institute, Fred Hutchinson Cancer Research Center and the Institute for Health Metrics and Evaluation. In 2015, the Washington Global Health Alliance counted 168 global health organizations in Washington state, many are headquartered in Seattle.