Phoenix is the anchor of the Phoenix metropolitan area, also known as the Valley of the Sun, which in turn is a part of the Salt River Valley. The metropolitan area is the 12th largest by population in the United States, with approximately 4.66 million people as of 2016. In addition, Phoenix is the seat of Maricopa County, and at 517.9 square miles (1,341 km2), it is the largest city in the state, more than twice the size of Tucson and one of the largest cities in the United States.

Settled in 1867 as an agricultural community near the confluence of the Salt and Gila Rivers, Phoenix incorporated as a city in 1881. It became the capital of Arizona in 1889. Located in the northeastern reaches of the Sonoran Desert, Phoenix has a hot desert climate. Despite this, its canal system led to a thriving farming community, many of the original crops remaining important parts of the Phoenix economy for decades, such as alfalfa, cotton, citrus, and hay (which was important for the cattle industry). Cotton, cattle, citrus, climate, and copper were known locally as the "Five C's" of Phoenix's economy. These industries remained the driving forces of the city until after World War II, when high-tech companies began to move into the valley and air conditioning made Phoenix's hot summers more bearable.

The city averaged a four percent annual population growth rate over a 40-year period from the mid-1960s to the mid-2000s. This growth rate slowed during the Great Recession of 2007–09, and has rebounded slowly. Phoenix is the cultural center of the Valley of the Sun, as well as the entire state.

A total commission of 6.0%-7.0% is typically asked for by “full service” Agents working for the big national real estate firms in Phoenix-Mesa-Scottsdale, Arizona. 70% of Sellers list with the first Agent they speak to, and we find that most Sellers who agree to pay a full 6.0%-7.0% commission do not realize that real estate commissions are NEGOTIABLE!

In Phoenix-Mesa-Scottsdale, Arizona, you will find the following real estate commissions charged*:

In the State of Arizona, median home prices are as follows*:

At ListingBidder.com, we first negotiate on your behalf a competitive real estate commission structure with HIGHLY EXPERIENCED, HIGHLY RECOMMENDED Agents who know your LOCAL market (even YOUR NEIGHBORHOOD); each ready to bid for your business.  These Agents are not just ordinary Agents as many of them are broker/owners and they have the best ability to negotiate their commissions and be competitive, in part because they do not have to share their listing commission with the brokerage firm.  This is a direct benefit to you and will save you thousands of dollars in real estate commission fees over the typical fees in Arizona.

After leading the U.S. in population growth for over a decade, the sub-prime mortgage crisis, followed by the recession, led to a slowing in the growth of Phoenix. There were approximately 77,000 people added to the population of the Phoenix metropolitan area in 2009, which was down significantly from its peak in 2006 of 162,000. Despite this slowing, Phoenix's population grew by 9.4% since the 2000 census (a total of 124,000 people), while the entire Phoenix metropolitan area grew by 28.9% during the same period. This compares with an overall growth rate nationally during the same time frame of 9.7%. Not since 1940–50, when the city had a population of 107,000, had the city gained less than 124,000 in a decade. Phoenix's recent growth rate of 9.4% from the 2010 census is the first time it has recorded a growth rate under 24% in a census decade. However, in 2016, Phoenix once again became the fastest growing city in the United States, adding approximately 88 people per day during the preceding year.

The Phoenix Metropolitan Statistical Area (MSA) (officially known as the Phoenix-Mesa-Glendale MSA), is one of 10 MSAs in Arizona, and was the 14th largest in the United States, with a total population of 4,192,887 as of the 2010 Census. Consisting of parts of both Pinal and Maricopa counties, the MSA accounts for 65.5% of the total population of the state of Arizona. Phoenix only contributed 13% to the total growth rate of the MSA, down significantly from its 33% share during the prior decade. Phoenix is also part of the Arizona Sun Corridor megaregion (MR), which is the 10th most populous of the 11 MRs, and the 8th largest by area. It had the 2nd largest growth by percentage of the MRs (behind only the Gulf Coast MR) between 2000 and 2010. 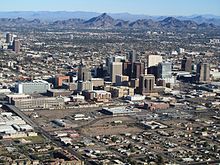 Downtown Phoenix from an airplane, 2011

The population is almost equally split between men and women, with men making up 50.2% of city's citizens. The population density is 2,797.8 people per square mile, and the median age of the city is 32.2 years, with only 10.9 of the population being over 62. 98.5% of Phoenix's population lives in households with an average household size of 2.77 people. There were 514,806 total households, with 64.2% of those households consisting of families: 42.3% married couples, 7% with an unmarried male as head of household, and 14.9% with an unmarried female as head of household. 33.6% of those households have children below the age of 18. Of the 35.8% of non-family households, 27.1% of them have a householder living alone, almost evenly split between men and women, with women having 13.7% and men occupying 13.5%. Phoenix has 590,149 housing units, with an occupancy rate of 87.2%. The largest segment of vacancies is in the rental market, where the vacancy rate is 14.9%, and 51% of all vacancies are in rentals. Vacant houses for sale only make up 17.7% of the vacancies, with the rest being split among vacation properties and other various reasons.

According to the 2010 Census, the racial breakdown of Phoenix was as follows:

According to a 2014 study by the Pew Research Center, 66% of the population of the city identified themselves as Christians, while 26% claimed no religious affiliation. The same study says that other religions (including Judaism, Buddhism, Islam, and Hinduism) collectively make up about 7% of the population. In 2010, according to the Association of Religion Data Archives, which conducts religious census each ten years, 39% of those polled in Maricopa county considered themselves a member of a religious group. Of those who expressed a religious affiliation, the area's religious composition was reported as 35% Catholic, 22% to Evangelical Protestant denominations, 16% Latter-Day Saints (LDS), 14% to nondenominationalcongregations, 7% to Mainline Protestant denominations, and 2% Hindu. The remaining 4% belong to other religions, such as Buddhism, and Judaism. While there was an overall increase in the number of religious adherents over the decade of 103,000, that did not keep pace with the overall population increase in the country during the same period, which increased by almost three-quarters of million individuals, resulting in the percentage drop. The largest aggregate increases were in the LDS (a 58% increase) and Evangelical Protestant churches (14% increase), while all other categories saw their numbers drop slightly, or remain static. Overall, the Catholic Church had an 8% drop, while Mainline Protestant groups saw a 28% decline.

The early economy of Phoenix was focused primarily on agriculture and natural resources, dependent on the "5Cs" of copper, cattle, climate, cotton, and citrus. With the establishment of the Southern Pacific rail line in 1926, the opening of the Union Station in 1923, and the creation of Sky Harbor airport by the end of the decade, the city became more easily accessible. The Great Depression affected Phoenix, but Phoenix had a diverse economy and by 1934 the recovery was underway. At the conclusion of World War II, the valley's economy surged, as many men who had undergone their military training at the various bases in and around Phoenix returned with their families. The construction industry, spurred on by the city's growth, further expanded with the development of Sun City. It became the template for suburban development in post-WWII America, and Sun City became the template for retirement communities when it opened in 1960.  The city averaged a 4 percent annual growth rate over a 40-year period from the mid-1960s to the mid-2000s.

As the national financial crisis of 2007–10 began, construction in Phoenix collapsed and housing prices plunged. Arizona jobs declined by 11.8% from peak to trough; in 2007 Phoenix had 1,918,100 employed individuals, by 2010 that number had shrunk by 226,500 to 1,691,600. By the end of 2015, the employment number in Phoenix had risen to 1.97 million, finally regaining its pre-recession levels, with job growth occurring across the board.

In Phoenix, real estate developers face few constraints when planning and developing new projects. Accordingly, the city is prone to overbuilding during times of economic prosperity. This explains the city's higher-than-average vacancy rates.

As of 2010, the top five employment categories were office and administrative support (17.8%), sales (11.6%), food preparation and serving (9%), transportation and material moving (6.1%), and management (5.8%). The single largest occupation is retail salespersons, which account for 3.7% of the workforce. As of January 2016, 10.5% of the workforce were government employees, a high number because the city is both the county seat and state capital. The civilian labor force was 2,200,900, and the unemployment rate stood at 4.6%.

Phoenix is currently home to four Fortune 500 companies: electronics corporation Avnet, mining company Freeport-McMoRan, retailer PetSmart, and waste hauler Republic Services. Honeywell's Aerospace divisionis headquartered in Phoenix, and the valley hosts many of their avionics and mechanical facilities. Intel has one of their largest sites in the area, employing about 12,000 employees, the second largest Intel location in the country. The city is also home to: the headquarters of U-HAUL International; Best Western; and Apollo Group, parent of the University of Phoenix. US Air/American Airlines is the largest carrier at Sky Harbor International Airport in Phoenix. Mesa Air Group, a regional airline group, is headquartered in Phoenix.

The military has a significant presence in Phoenix, with Luke Air Force Base located in the western suburbs. The city was severely impacted by the effects of the sub-prime mortgage crash. However, Phoenix has recovered 83% of the jobs lost due to the recession.