Las Vegas, officially the City of Las Vegas and often known simply as Vegas, is the 28th-most populated city in the United States, the most populated city in the state of Nevada, and the county seat of Clark County. The city anchors the Las Vegas Valley metropolitan area and is the largest city within the greater Mojave Desert. Las Vegas is an internationally renowned major resort city, known primarily for its gambling, shopping, fine dining, entertainment, and nightlife. The Las Vegas Valley as a whole serves as the leading financial, commercial, and cultural center for Nevada.

The city bills itself as The Entertainment Capital of the World, and is famous for its mega casino–hotels and associated activities. It is a top three destination in the United States for business conventions and a global leader in the hospitality industry, claiming more AAA Five Diamond hotels than any other city in the world. Today, Las Vegas annually ranks as one of the world's most visited tourist destinations. The city's tolerance for numerous forms of adult entertainment earned it the title of Sin City, and has made Las Vegas a popular setting for literature, films, television programs, and music videos.

Las Vegas was settled in 1905 and officially incorporated in 1911. At the close of the 20th century, it was the most populated American city founded within that century (a similar distinction earned by Chicago in the 1800s). Population growth has accelerated since the 1960s, and between 1990 and 2000 the population nearly doubled, increasing by 85.2%. Rapid growth has continued into the 21st century, and according to a 2017 estimate, the population is 648,224 with a regional population of 2,248,390.

"Las Vegas" is often used to describe areas beyond official city limits—especially the areas on and near the Las Vegas Strip, which is actually located within the unincorporated communities of Paradise, Winchester, and Enterprise.

A total commission of 6.0% is typically asked for by “full service” Agents working for the big national real estate firms in Las Vegas, Henderson, Paradise, Nevada. 70% of Sellers list with the first Agent they speak to, and we find that most Sellers who agree to pay a full 6.0% commission do not realize that real estate commissions are NEGOTIABLE!

In the State of Nevada, median home prices are as follows*:

At ListingBidder.com, we first negotiate on your behalf a competitive real estate commission structure with HIGHLY EXPERIENCED, HIGHLY RECOMMENDED Agents who know your LOCAL market (even YOUR NEIGHBORHOOD); each ready to bid for your business.  These Agents are not just ordinary Agents as many of them are broker/owners and they have the best ability to negotiate their commissions and be competitive, in part because they do not have to share their listing commission with the brokerage firm.  This is a direct benefit to you and will save you thousands of dollars in real estate commission fees over the typical fees in Nevada.

According to the 2010 Census, the racial composition of Las Vegas was as follows:

Hawaiians and Las Vegans sometimes refer to Las Vegas as the "ninth island of Hawaii" because so many Hawaiians have moved to the city.

Downtown Las Vegas with Red Rock Canyon in the background.

According to a 2004 study, Las Vegas has one of the highest divorce rates. The city's high divorce rate is not wholly due to Las Vegans themselves getting divorced. Since divorce is easier in Nevada than most other states, many people come from across the country for the easier process. Similarly, Nevada marriages are notoriously easy to get. Las Vegas has one of the highest marriage rates of U.S. cities, with many licenses issued to people from outside the area (see Las Vegas weddings).

The primary drivers of the Las Vegas economy are tourism, gaming and conventions, which in turn feed the retail and restaurant industries. 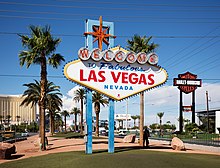 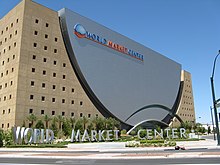 The major attractions in Las Vegas are the casinos and the hotels, although in recent years other new attractions have begun to emerge.

Most casinos in the downtown area are located on Fremont Street, with The Stratosphere being one of the exceptions. Fremont East, adjacent to the Fremont Street Experience, was granted variances to allow bars to be closer together, similar to the Gaslamp Quarter of San Diego, the goal being to attract a different demographic than the Strip attracts.

The Golden Gate Hotel & Casino, located downtown along the Fremont Street Experience, is the oldest continuously operating hotel and casino in Las Vegas; it opened in 1906 as the Hotel Nevada.

The year 1931 marked the opening of the Northern Club (now the La Bayou). The most notable of the early casinos may have been Binion's Horseshoe (now Binion's Gambling Hall and Hotel) while it was run by Benny Binion.

The center of the gambling and entertainment industry, however, is located on the Las Vegas Strip, outside the city limits in the surrounding unincorporated communities of Paradise and Winchester in Clark County. The largest and most notable casinos and buildings are located there.

When The Mirage opened in 1989, it started a trend of major resort development on the Las Vegas Strip outside of the city. This resulted in a drop in tourism in the downtown area, but many recent projects have increased the number of visitors to downtown.

An effort has been made by city officials to diversify the economy by attracting health-related, high-tech and other commercial interests. No state tax for individuals or corporations, as well as a lack of other forms of business-related taxes, have aided the success of these efforts.

The Fremont Street Experience was built in an effort to draw tourists back to the area, and has been popular since its startup in 1995.

The city purchased 61 acres (25 ha) of property from the Union Pacific Railroad in 1995 with the goal of creating a better draw for more people to the downtown area. In 2004, Las Vegas Mayor Oscar Goodman announced plans for Symphony Park, which could include a mixture of offerings, such as residential space and office buildings.

On land across from Symphony Park, the World Market Center Las Vegas opened in 2005. It currently encompasses three large buildings with a total of 5.1 million square feet. Trade shows for the furniture and furnishing industries are held there semiannually.

Also located nearby is the Las Vegas North Premium Outlets. A second expansion was completed in May 2015, with the mall currently offering 175 stores.

A new Las Vegas City Hall opened in February 2013 on downtown's Main Street. The former City Hall building is now occupied by the corporate headquarters for the major online retailer, Zappos.com, which opened downtown in 2013. Zappos CEO Tony Hsieh has taken an interest in the urban area and has contributed $350 million toward a revitalization effort called the Downtown Project. Projects funded include Las Vegas's first independent bookstore, The Writer's Block.