Indigenous peoples inhabited the area dating to approximately 2000 BC. In 1818, the Delaware relinquished title to their tribal lands in the Treaty of St. Mary's. In 1821, Indianapolis was founded as a planned city for the new seat of Indiana's state government. The city was platted by Alexander Ralston and Elias Pym Fordham on a 1 square mile (2.6 km2) grid adjacent to the White River. Completion of the National Road and the advent of the railroad later solidified the city's position as a manufacturing and transportation hub.

Anchoring the 25th largest economic region in the U.S., the city's economy is based primarily on finance and insurance, manufacturing, professional and business services, education and health care, government, and wholesale trade. Indianapolis is within a single-day drive of 70 percent of the nation's population, lending to one of its nicknames as the "Crossroads of America". Indianapolis has developed niche markets in amateur sports and auto racing. The city is perhaps best known for annually hosting the world's largest single-day sporting event, the Indianapolis 500.

Indianapolis is home to two major sports clubs, the Indiana Pacers of the National Basketball Association and the Indianapolis Colts of the National Football League. The city's philanthropic community has been instrumental in the development of its cultural institutions and collections, including the world's largest children's museum, nation's largest privately funded zoo, historic buildings and sites, and public art. Indianapolis is headquarters for the American Legion and home to a significant collection of monuments dedicated to veterans and war dead, the most in the U.S. outside of Washington, D.C. Since the 1970 city-county consolidation, known as Unigov, local government administration operates under the direction of an elected 25-member city-county council headed by the mayor. Indianapolis is considered a "high sufficiency" world city.

A total commission of 6.0% is typically asked for by “full service” Agents working for the big national real estate firms in Indianapolis-Carmel-Anderson, Indiana. 70% of Sellers list with the first Agent they speak to, and we find that most Sellers who agree to pay a full 6.0% commission do not realize that real estate commissions are NEGOTIABLE!

In the State of Indiana, median home prices are as follows*:

At ListingBidder.com, we first negotiate on your behalf a competitive real estate commission structure with HIGHLY EXPERIENCED, HIGHLY RECOMMENDED Agents who know your LOCAL market (even YOUR NEIGHBORHOOD); each ready to bid for your business.  These Agents are not just ordinary Agents as many of them are broker/owners and they have the best ability to negotiate their commissions and be competitive, in part because they do not have to share their listing commission with the brokerage firm.  This is a direct benefit to you and will save you thousands of dollars in real estate commission fees over the typical fees in Indiana. 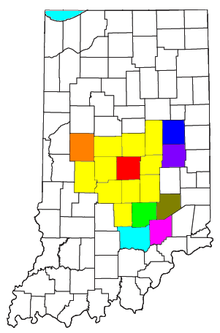 Marion County
Indianapolis-Carmel-Anderson, IN MSA
Muncie, IN MSA
Columbus, IN MSA
New Castle, IN
Seymour, IN
Crawfordsville, IN
North Vernon, IN
Greensburg, IN

The U.S. Census Bureau considers Indianapolis as two entities: the consolidated city and the city's remainder, or balance. The consolidated city covers an area known as Unigov, coterminous with Marion County, except the independent municipalities of Beech Grove, Lawrence, Southport, and Speedway. The city's balance excludes the populations of ten semi-autonomous municipalities that are included in totals for the consolidated city. These are Clermont, Crows Nest, Homecroft, Meridian Hills, North Crows Nest, Rocky Ripple, Spring Hill, Warren Park, Williams Creek, and Wynnedale. An eleventh town, Cumberland, is partially included. The city's consolidated population for the year 2012 was 844,220. The city's remainder, or balance, population was estimated at 834,852 for 2012, a 2% increase over the total population of 820,445 reported in the 2010 U.S. Census. As of 2010, the city's population density was 2,270 people per square mile (880/km2). Indianapolis is the most populous city in Indiana, containing 12.8% of the state's total population.

As of 2015, the Indianapolis metropolitan area had the 18th highest percentage of LGBT residents in the U.S., with 4.2% of residents identifying as gay, lesbian, bisexual, or transgender.

In 2015, the Indianapolis metropolitan area had a gross domestic product (GDP) of $134 billion. The top five industries were: finance, insurance, real estate, rental, and leasing ($30.7B), manufacturing ($30.1B), professional and business services ($14.3B), educational services, health care, and social assistance ($10.8B), and wholesale trade ($8.1B). Government, if it had been a private industry, would have ranked fifth, generating $10.2 billion.

Compared to Indiana as a whole, the Indianapolis metropolitan area has a lower proportion of manufacturing jobs and a higher concentration of jobs in wholesale trade; administrative, support, and waste management; professional, scientific, and technical services; and transportation and warehousing. The city's major exports include pharmaceuticals, motor vehicle parts, medical equipment and supplies, engine and power equipment, and aircraft products and parts. According to the Bureau of Labor Statistics, the region's unemployment rate was 2.8 percent in December 2017.

Like many Midwestern cities, recent deindustrialization trends have had a significant impact on the local economy. Once home to 60 automakers, Indianapolis rivaled Detroit as a center of automobile manufacturing in the early 20th century. Between 1990 and 2012, approximately 26,900 manufacturing jobs were lost in the city, including the automotive plant closures of Chrysler, Ford, and General Motors. In 2016, Carrier Corporation announced the closure of its Indianapolis plant, moving 1,400 manufacturing jobs to Mexico. Since 1915, Rolls-Royce Holdings has had operations in Indianapolis. It is the third largest manufacturing employer and thirteenth largest employer overall in the city, with a workforce of 4,300 in aircraft engine development and manufacturing.

Biotechnology, life sciences and health care are major sectors of Indianapolis's economy. As of 2016, Eli Lilly and Company was the largest private employer in the city, with more than 11,000 workers. The North American headquarters for Roche Diagnostics and Dow AgroSciences are also located in the city. A 2014 report by the Battelle Memorial Institute and Biotechnology Industry Organization indicated that the Indianapolis–Carmel–Anderson MSA was the only U.S. metropolitan area to have specialized employment concentrations in all five bioscience sectors evaluated in the study: agricultural feedstock and chemicals; bioscience-related distribution; drugs and pharmaceuticals; medical devices and equipment; and research, testing, and medical laboratories. The regional health care providers of Community Health Network, Eskenazi Health, Franciscan Health, Indiana University Health, and St. Vincent Health have a combined workforce of 43,700.

The city's central location and extensive highway and rail infrastructure have positioned Indianapolis as an important logistics center, home to 1,500 distribution firms employing some 100,000 workers. As home to the second largest FedEx Express hub in the world, Indianapolis International Airport ranks as the sixth busiest U.S. airport in terms of air cargo transport, handling over 1 million tons and employing 6,600 in 2015. Indianapolis is a hub for CSX Transportation, home to its division headquarters, an intermodal terminal, and classification yard (in the suburb of Avon). Amtrak's Beech Grove Shops, in the enclave of Beech Grove, serve as its primary heavy maintenance and overhaul facility, while the Indianapolis Distribution Center is the company's largest material and supply terminal.

The hospitality industry is an increasingly vital sector to the Indianapolis economy. According to Visit Indy, 28.6 million visitors generated $5.2 billion in 2016, the sixth straight year of record growth. Indianapolis has long been a sports tourism destination, but has more recently relied on conventions. The Indiana Convention Center (ICC) and Lucas Oil Stadium are considered mega convention center facilities, with a combined 750,000 square feet (70,000 m2) of exhibition space. ICC is connected to 12 hotels and 4,700 hotel rooms, the most of any U.S. convention center. In 2008, the facility hosted 42 national conventions with an attendance of 317,815; in 2014, it hosted 106 for an attendance of 635,701. Since 2003, Indianapolis has hosted Gen Con, one of the largest gaming conventions in North America.