Charlotte is the most populous city in the U.S. state of North Carolina. Located in the Piedmont, it is the county seat of Mecklenburg County.

In 2016, the U.S. Census Bureau estimated the population was 842,051, making it the 17th-most populous city in the United States. The Charlotte metropolitan area ranks 22nd-largest in the U.S., and had a 2016 population of 2,474,314. The Charlotte metropolitan area is part of a sixteen-county market region or combined statistical area with a 2016 U.S. Census population estimate of 2,632,249. Between 2004 and 2014, Charlotte was ranked as the country's fastest growing metro area, with 888,000 new residents. Based on U.S. Census data from 2005 to 2015, it tops the 50 largest U.S. cities as the millennial hub. It is the second-largest city in the southeastern United States, just behind Jacksonville, Florida. It is the third-fastest growing major city in the United States. It is listed as a "gamma-minus" global city by the Globalization and World Cities Research Network. Residents are referred to as "Charlotteans".

Charlotte is home to the corporate headquarters of Bank of America and the east coast operations of Wells Fargo, which along with other financial institutions made it the second-largest banking center in the United States from 1995 to 2017 and the third-largest from 2017 to present.

Charlotte has a humid subtropical climate. It is located several miles east of the Catawba River and southeast of Lake Norman, the largest man-made lake in North Carolina. Lake Wylie and Mountain Island Lake are two smaller man-made lakes located near the city.

A total commission of 6.0% is typically asked for by “full service” Agents working for the big national real estate firms in Charlotte, Concord, Gastonia, NC, SC, North Carolina. 70% of Sellers list with the first Agent they speak to, and we find that most Sellers who agree to pay a full 6.0% commission do not realize that real estate commissions are NEGOTIABLE!

In the State of North Carolina, median home prices are as follows*:

At ListingBidder.com, we first negotiate on your behalf a competitive real estate commission structure with HIGHLY EXPERIENCED, HIGHLY RECOMMENDED Agents who know your LOCAL market (even YOUR NEIGHBORHOOD); each ready to bid for your business.  These Agents are not just ordinary Agents as many of them are broker/owners and they have the best ability to negotiate their commissions and be competitive, in part because they do not have to share their listing commission with the brokerage firm.  This is a direct benefit to you and will save you thousands of dollars in real estate commission fees over the typical fees in North Carolina.

According to the 2010 United States Census, the racial composition of Charlotte was:

Charlotte has become a major U.S. financial center with the third most banking assets after New York City and San Francisco. The nation's second largest financial institution by total assets, Bank of America, calls the city home. The city was also the former corporate home of Wachovia until its 2008 acquisition by Wells Fargo; Wells Fargo integrated legacy Wachovia, with the two banks fully merged at the end of 2011, which included transitioning all of the Wachovia branches in the Carolinas to Wells Fargo branches by October 2011. Since then, Charlotte has become the regional headquarters for East Coast operations of Wells Fargo, which is headquartered in San Francisco, California. Charlotte also serves as the headquarters for Wells Fargo's capital markets activities including sales and trading, equity research, and investment banking. Bank of America's headquarters, along with other regional banking and financial services companies, are located primarily in the Uptown central business district. Microsoft's East Coast headquarters are located in Charlotte.

Charlotte is the major center in the U.S. motorsports industry, housing multiple offices of NASCAR, the NASCAR Hall of Fame, and Charlotte Motor Speedway in Concord. Approximately 75% of the NASCAR industry's race teams, employees and drivers are based nearby. The large presence of the racing technology industry and the newly built NHRA dragstrip, zMAX Dragway at Concord, are influencing other top professional drag racers to move their shops to Charlotte as well.

Located in the western part of Mecklenburg County is the U.S. National Whitewater Center, which consists of man-made rapids of varying degrees, is open to the public year-round. 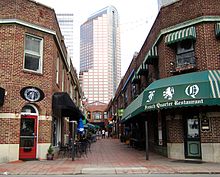 One Wells Fargo Center behind the Latta Arcade in Uptown Charlotte

The Charlotte Region has a major base of energy-oriented organizations and has become known as "Charlotte USA – The New Energy Capital." In the region there are more than 240 companies directly tied to the energy sector, collectively employing more than 26,400. Since 2007 more than 4,000 energy sector jobs have been announced. Major energy players in Charlotte include AREVA, Babcock & Wilcox, Duke Energy, Electric Power Research Institute, Fluor, Metso Power, Piedmont Natural Gas, Siemens Energy, Shaw Group, Toshiba, URS Corp., and Westinghouse. The University of North Carolina at Charlotte has a reputation in energy education and research, and its Energy Production and Infrastructure Center (EPIC) trains energy engineers and conducts research.

The area is an increasingly growing trucking and freight transportation hub for the East Coast. The Charlotte Center city has seen remarkable growth over the last decade. Numerous residential units continue to be built uptown, including over 20 skyscrapers under construction, recently completed, or in the planning stage. Many new restaurants, bars and clubs now operate in the Uptown area. Several projects are transforming the Midtown Charlotte/Elizabeth area.

In 2013, Forbes named Charlotte among its list of Best Places for Business and Careers. Charlotte was listed as the 20th largest city in the US, and the 60th fastest growing city in the US between 2000 and 2008.

According to Charlotte's 2014 Comprehensive Annual Financial Report, the top employers in the city are: