Baton Rouge is the capital of the U.S. state of Louisiana and its second-largest city. It forms the parish seat of East Baton Rouge Parish and is located on the eastern bank of the Mississippi River.

As the capital city, Baton Rouge is the political hub for Louisiana, and is the second-largest city in the state after New Orleans, with an estimated population of 227,715 in 2016. The metropolitan area surrounding the city, known as Greater Baton Rouge, is also the second-largest in Louisiana, with a population of 830,480 people as of 2015. The urban area has around 594,309 inhabitants.

Baton Rouge is a major industrial, petrochemical, medical, research, motion picture, and growing technology center of the American South. It is also the location of Louisiana State University, the state's flagship university and the largest public university in the state. The Port of Greater Baton Rouge is the tenth largest in the United States in terms of tonnage shipped, and is the farthest upstream Mississippi River port capable of handling Panamax ships.

The Baton Rouge area owes its historical importance to its strategic site upon the Istrouma Bluff, the first natural bluff upriver from the Mississippi River Delta. This allowed development of a business quarter safe from seasonal flooding. In addition, the city built a levee system stretching from the bluff southward to protect the riverfront and low-lying agricultural areas. The city is a culturally rich center, with settlement by immigrants from numerous European nations and African peoples. It was ruled by seven different governments: French, British, and Spanish in the colonial era, West Floridian, United States territory and state, Confederate, and United States again.

A total commission of 6.0% is typically asked for by “full service” Agents working for the big national real estate firms in Baton Rouge, Louisiana. 70% of Sellers list with the first Agent they speak to, and we find that most Sellers who agree to pay a full 6.0% commission do not realize that real estate commissions are NEGOTIABLE!

In Baton Rouge, Louisiana, you will find the following real estate commissions charged*:

In the State of Louisiana, median home prices are as follows*:

At ListingBidder.com, we first negotiate on your behalf a competitive real estate commission structure with HIGHLY EXPERIENCED, HIGHLY RECOMMENDED Agents who know your LOCAL market (even YOUR NEIGHBORHOOD); each ready to bid for your business.  These Agents are not just ordinary Agents as many of them are broker/owners and they have the best ability to negotiate their commissions and be competitive, in part because they do not have to share their listing commission with the brokerage firm.  This is a direct benefit to you and will save you thousands of dollars in real estate commission fees over the typical fees in Louisiana.

Of all households, 28.1% had children under the age of 18, 35.8% were married couples living together, 19.0% had a female householder with no husband present, and 40.8% were non-families. 31.7% of all households were made up of individuals and 8.6% had someone living alone who was 65 years of age or older. The average household size was 2.42 and the average family size was 3.12.

Baton Rouge enjoys a strong economy that has helped the city be ranked as one of the "Top 10 Places for Young Adults" in 2010 by Portfolio Magazine and one of the top 20 cities in North America for economic strength by Brookings. In 2009, the city was ranked as the 9th best place in the country to start a new business by CNN. Lamar Advertising Company has its headquarters in Baton Rouge.

Baton Rouge is the furthest inland port on the Mississippi River that can accommodate ocean-going tankers and cargo carriers. The ships transfer their cargo (grain, crude, cars, containers) at Baton Rouge onto rails and pipelines (to travel east-west) or barges (to travel north). Deep-draft vessels cannot pass the Old Huey Long Bridge because the clearance is insufficient, and the river depth decreases significantly just to the north, near Port Hudson.

Dow Chemical Company has a large plant in Iberville Parish near Plaquemine, 17 miles (27 km) south of Baton Rouge. NanYa Technology Corporation has a large facility in North Baton Rouge that makes PVC and CPVC pipes. Shaw Construction, Turner, and Harmony all started with performing construction work at these plants. 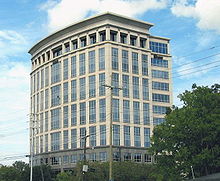 As well as being the state capital and parish seat, the city is the home of Louisiana State University. One of the largest single employers in Baton Rouge is the state government, which consolidated all branches of state government downtown at the Capitol Park complex.

Southeastern Louisiana University and Our Lady of the Lake College both have nursing schools in the medical district off Essen Lane. Louisiana State University's Pennington Biomedical Research Center, which conducts clinical and biological research, also contributes to research-related employment in the area around the Baton Rouge medical district.

The film industry in Louisiana has increased dramatically in the last decade, in response to generous tax incentives adopted by the state in 2002. In September 2013 the Baton Rouge Film Commission reported that the industry had brought more than $90 million into the local economy in 2013. Baton Rouge's largest production facility is the Celtic Media Centre, opened in 2006 by a local group in collaboration with Raleigh Studios of Los Angeles; Raleigh dropped its involvement in 2014.

According to the city's 2013 Comprehensive Annual Financial Report, the top employers in the city were: