Atlanta is the capital and most populous city of the state of Georgia in the United States. With an estimated 2016 population of 472,522, it is the cultural and economic center of the Atlanta metropolitan area, home to 5.8 million people and the ninth-largest metropolitan area in the United States. Atlanta is the seat of Fulton County and a small portion of the city extends eastward into DeKalb County.

Atlanta was founded as a transportation hub at the intersection of two railroad lines in 1837. After being mostly burned to the ground during the American Civil War, the city rose from its ashes to become a national center of commerce and the unofficial capital of the "New South". During the 1960s, Atlanta became a major organizing center of the civil rights movement, with Dr. Martin Luther King, Jr., Ralph David Abernathy, and many other locals playing major roles in the movement's leadership. In the decades following, the city earned a reputation as "too busy to hate" for the relatively progressive views of its citizens and leaders compared to other cities in the "Deep South". During the modern era, Atlanta has attained international prominence as a major air transportation hub, with Hartsfield–Jackson Atlanta International Airport being by far the world's busiest airport since 1998.

Atlanta is rated a "beta(+)" world city that exerts a moderate impact on global commerce, finance, research, technology, education, media, art, and entertainment. It ranks 18th among world cities and 7th in the nation with a gross domestic product of $320 billion. Atlanta's economy is considered diverse, with dominant sectors that include logistics, professional and business services, media operations, and information technology. Atlanta has topographic features that include rolling hills and dense tree coverage, earning it the nickname of "the city in a forest." Revitalization of Atlanta's neighborhoods, initially spurred by the 1996 Olympics in Atlanta, has intensified in the 21st century, altering the city's demographics, politics, and culture.

A total commission of 6.0% is typically asked for by “full service” Agents working for the big national real estate firms in Atlanta, Sandy Spring, Marietta, Georgia. 70% of Sellers list with the first Agent they speak to, and we find that most Sellers who agree to pay a full 6.0% commission do not realize that real estate commissions are NEGOTIABLE!

In the State of Georgia, median home prices are as follows*:

At ListingBidder.com, we first negotiate on your behalf a competitive real estate commission structure with HIGHLY EXPERIENCED, HIGHLY RECOMMENDED Agents who know your LOCAL market (even YOUR NEIGHBORHOOD); each ready to bid for your business.  These Agents are not just ordinary Agents as many of them are broker/owners and they have the best ability to negotiate their commissions and be competitive, in part because they do not have to share their listing commission with the brokerage firm.  This is a direct benefit to you and will save you thousands of dollars in real estate commission fees over the typical fees in Georgia.

The 2010 United States Census reported that Atlanta had a population of 420,003. The population density was 3,154 per square mile (1232/km2). The racial makeup and population of Atlanta was 54.0% Black or African American, 38.4% White, 3.1% Asian and 0.2% Native American. Those from some other race made up 2.2% of the city's population, while those from two or more races made up 2.0%. Hispanics of any race made up 5.2% of the city's population. The median income for a household in the city was $45,171. The per capita income for the city was $35,453. 22.6% percent of the population was living below the poverty line. Atlanta has one of the highest LGBT populations per capita, ranking third among major American cities, behind San Francisco and slightly behind Seattle, with 12.8% of the city's total population identifying as gay, lesbian, or bisexual. 7.3% of Atlantans were born abroad (86th in the US).

In the 2010 Census, Atlanta was recorded as the nation's fourth-largest majority-black city. It has long been known as a center of African-American political power, education, and culture, often called a black mecca. African-American residents of Atlanta have followed whites to newer housing in the suburbs in the early 21st century. From 2000 to 2010, the city's black population decreased by 31,678 people, shrinking from 61.4% of the city's population in 2000 to 54.0% in 2010.

Out of the total population five years and older, 83.3% spoke only English at home, while 8.8% spoke Spanish, 3.9% another Indo-European language, and 2.8% an Asian language. Atlanta's dialect has traditionally been a variation of Southern American English. The Chattahoochee River long formed a border between the Coastal Southern and Southern Appalachian dialects. Because of the development of corporate headquarters in the region, attracting migrants from other areas of the country, by 2003, Atlanta magazine concluded that Atlanta had become significantly "de-Southernized." A Southern accent was considered a handicap in some circumstances. In general, Southern accents are less prevalent among residents of the city and inner suburbs and among younger people; they are more common in the outer suburbs and among older people. At the same time, some residents of the city express Southern variations of African-American English.

Religion in Atlanta, while historically centered on Protestant Christianity, now involves many faiths as a result of the city and metro area's increasingly international population. Protestant Christianity still maintains a strong presence in the city (63%), but in recent decades the Catholic Church has increased in numbers and influence because of new migrants in the region. Metro Atlanta also has numerous ethnic or national Christian congregations, including Korean and Indian churches. The larger non-Christian faiths are Judaism, Islam and Hinduism. Overall, there are over 1,000 places of worship within Atlanta.

With a GDP of $304 billion, the Metro Atlanta economy is the eighth-largest in the country and 17th-largest in the world. Corporate operations play a major role in the economy, as the city claims the country's third-largest concentration of Fortune 500 companies, and hosts the global headquarters of corporations such as The Coca-Cola Company, The Home Depot, Delta Air Lines, AT&T Mobility, Chick-fil-A, and UPS. Over 75 percent of Fortune 1000 companies conduct business operations in metro Atlanta, and the region hosts offices of over 1,250 multinational corporations. Many corporations are drawn to Atlanta by the city's educated workforce; as of 2014, 45% of adults 25 or older in the city have at least 4-year college degrees, compared to the national average of 28%.

Atlanta began as a railroad town and logistics has remained a major component of the city's economy to this day. Atlanta is an important rail junction and contains major classification yards for Norfolk Southern and CSX. Since its construction in the 1950s, Hartsfield–Jackson Atlanta International Airport has served as a key engine of Atlanta's economic growth. Delta Air Lines, the city's largest employer and the metro area's third-largest, operates the world's largest airline hub at Hartsfield-Jackson and has helped make it the world's busiest airport, both in terms of passenger traffic and aircraft operations. Partly due to the airport, Atlanta has become a hub for diplomatic missions; as of 2017, the city contains 26 consulates general, the seventh-highest concentration of diplomatic missions in the United States.

Media is also an important aspect of Atlanta's economy. The city is a major cable television programming center. Ted Turner established the headquarters of both the Cable News Network (CNN) and the Turner Broadcasting System (TBS) in Atlanta. Cox Enterprises, the country's third-largest cable television service and the publisher of over a dozen American newspapers, is headquartered in the city. The Weather Channel is headquartered just outside Atlanta in Cobb County. 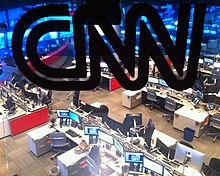 Compared to other American cities, Atlanta's economy has been disproportionately affected by the 2008 financial crisis and subsequent recession, with the city's economy earning a ranking of 68 among 100 American cities in a September 2014 report due to an elevated unemployment rate, declining real income levels, and a depressed housing market. From 2010 to 2011, Atlanta saw a 0.9% contraction in employment and only a 0.4% rise in income. Though unemployment had dropped to 7% by late 2014, this was still higher than the national unemployment rate of 5.8% Atlanta's housing market has struggled, with home prices falling by 2.1% in January 2012, reaching levels not seen since 1996. Compared with a year earlier, the average home price in Atlanta fell 17.3% in February 2012, the largest annual drop in the history of the index for any city. The collapse in home prices has led some economists to deem Atlanta the worst housing market in the country. Nevertheless, in August 2013, Atlanta appeared on Forbes magazine's list of the Best Places for Business and Careers.