Birmingham is the most populous city in the U.S. state of Alabama and the county seat of Jefferson County. The city's population was 212,237 in the 2010 United States Census. In the 2010 US Census, the Birmingham-Hoover Metropolitan Statistical Area had a population of about 1,128,047, which is approximately one-quarter of Alabama's population.

Birmingham was founded in 1871, during the post-Civil War Reconstruction period, through the merger of three pre-existing farm towns, notably, former Elyton. It was named for Birmingham, England, the UK's second largest city and then major industrial city. The Alabama city annexed smaller neighbors and developed as an industrial and railroad transportation center, based on mining, the new iron and steel industry, and railroading. Most of the original settlers who founded Birmingham were of English ancestry. The city was developed as a place where cheap, non-unionized immigrant labor (primarily Irish & Italian), along with African-American labor from rural Alabama, could be employed in the city's steel mills and blast furnaces, giving it a competitive advantage over unionized industrial cities in the Midwest and Northeast.

From its founding through the end of the 1960s, Birmingham was a primary industrial center of the southern United States. Its growth from 1881 through 1920 earned it nicknames such as "The Magic City" and "The Pittsburgh of the South". Its major industries were iron and steel production. Major components of the railroad industry, rails and railroad cars, were both manufactured in Birmingham: since the 1860s, the two primary hubs of railroading in the "Deep South" have been nearby Atlanta and Birmingham. The economy diversified in the latter half of the 20th century. Banking, telecommunications, transportation, electrical power transmission, medical care, college education, and insurance have become major economic activities. Birmingham ranks as one of the largest banking centers in the United States and as one of the most important business centers in the Southeast.

A total commission of 6% is typically asked for by “full service” Agents working for the big national real estate firms in Birmingham-Hoover, Alabama.  70% of Sellers list with the first Agent they speak to, and we find that most Sellers who agree to pay a full 6% commission do not realize that real estate commissions are NEGOTIABLE!

In Birmingham-Hoover, Alabama, you will find the following real estate commissions charged*:

From Birmingham's early days onward, the steel industry has always played a crucial role in the local economy. Though the steel industry no longer has the same prominence it once held in Birmingham, steel production and processing continue to play a key role in the economy. Steel products manufacturers American Cast Iron Pipe Company (ACIPCO) and McWane are based in the city. Several of the nation's largest steelmakers, including CMC Steel, U.S. Steel, and Nucor, also have a major presence in Birmingham. In recent years, local steel companies have announced about $100 million worth of investment in expansions and new plants in and around the city. Vulcan Materials Company, a major provider of crushed stone, sand, and gravel used in construction, is also based in Birmingham.

In the 1970s and 1980s, Birmingham's economy was transformed by investments in bio-technology and medical research at the University of Alabama at Birmingham (UAB) and its adjacent hospital. The UAB Hospital is a Level I trauma center providing health care and breakthrough medical research. UAB is now the area's largest employer and the second largest in Alabama with a workforce of about 23,000 as of 2016.Health care services providers HealthSouth, Surgical Care Affiliates and Diagnostic Health Corporation are also headquartered in the city. Caremark Rx was also founded in the city.

Birmingham is also a leading banking center, serving as home to two major banks: Regions Financial Corporation and BBVA Compass. SouthTrust, another large bank headquartered in Birmingham, was acquired by Wachovia in 2004. The city still has major operations as one of the regional headquarters of Wachovia, which itself is now part of Wells Fargo Bank. In November 2006, Regions Financial merged with AmSouth Bancorporation, which was also headquartered in Birmingham. They formed the 8th largest U.S. bank (by total assets). Nearly a dozen smaller banks are also headquartered in the Magic City, such as Superior Bank and Cadence Bank. As of 2009, the finance & banking sector in Birmingham employed 1,870 financial managers, 1,530 loan officers, 680 securities commodities and financial services sales agents, 380 financial analysts, 310 financial examiners, 220 credit analysts, and 130 loan counselors.While Birmingham has seen major change-ups with its banking industry, it was still the 9th largest banking hub in the United States by the amount of locally headquartered deposits in 2012. A 2014 study found that the city moved down a spot to the 10th largest banking center. 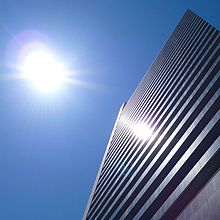 The telephone company that is now owned by AT&T Inc., which was formerly BellSouth and before that South Central Bell, which had its headquarters in Birmingham, has a major nexus in Birmingham, supported by a skyscraper downtown as well as several large operational center buildings and a data center.

The insurance companies Blue Cross and Blue Shield of Alabama, Protective Life, Infinity Property & Casualty, ProAssurance, and Liberty National have their headquarters in Birmingham, and these employ a large number of people in Greater Birmingham.

Birmingham is also a powerhouse of construction and engineering companies, including BE&K, Brasfield & Gorrie, Robins & Morton, and B.L. Harbert International which routinely are included in the Engineering News-Record lists of top design and international construction firms.

Two of the largest soft-drink bottlers in the United States, each with more than $500 million in sales per year, are located in Birmingham. The Buffalo Rock Company, founded in 1901, was formerly a maker of just ginger ale, but now it is a major bottler for the Pepsi Cola Company. The Coca-Cola Bottling Company, United, founded in 1902, is the third-largest bottler of Coca-Cola products in the U.S.

Birmingham has seen a noticeable decrease in the number of Fortune 500 companies headquartered in the city, due to mergers, moves, and buy-outs. In 2000, there were 10 Fortune 500 companies headquartered in the city, while in 2014 there was only 1, Regions Bank. Birmingham also used to be home to more than 30 publicly traded companies, but in 2011 there were only 15.This number has increased since then, but not significantly. Some companies, like Zoe's Kitchen were founded and operated in Birmingham, but moved their headquarters prior to going public, even after saying they would stay in their home state. Birmingham has been on a rebound, though, with the growth of companies like HealthSouth, Infinity Property and Casualty Corp., Southern Company, and others.

The Birmingham metropolitan area has consistently been rated as one of America's best places to work and earn a living based on the area's competitive salary rates and relatively low living expenses. One study published in 2006 by Salary.com determined that Birmingham was second in the nation for building personal net worth, based on local salary rates, living expenses and unemployment rates.

A 2006 study by web site bizjournals.com calculated Birmingham's "combined personal income" (the sum of all money earned by all residents of an area in a year) at $48.1 billion.

Birmingham's sales tax, which also applies fully to groceries, stands at 10 percent and is the highest tax rate of the nation's 100 largest cities.

In 2017, Birmingham's largest public companies by market capitalization were Vulcan Materials (VMC, $17.63 billion), Regions Bank (RF, $16.17 billion), Medical Properties Trust (MPW, $4.91 billion), Energen (EGN, $4.6 billion), and HealthSouth (HLS, $4.35 billion).All were listed on the New York Stock Exchange. Protective Life was bought by the Japanese company Dai-Ichi in 2015 and removed from public trading. If Alabama Power was considered independent of the Southern Company (headquartered in Atlanta), it would be the second largest company in Birmingham with more than $5.8 billion in revenue in 2015.